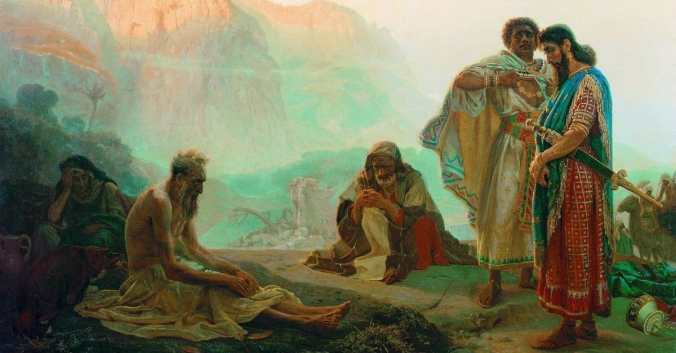 “‘If you will seek God and plead with the Almighty for mercy, if you are pure and upright, surely then He will rouse Himself for you and restore your rightful habitation.’” (Job 8:5-6)

Job is one of the most pitiable characters in the Bible. When we first meet him, we learn of his great wealth and his stunning relationship with God. Then, thirteen verses into chapter one, all of his worldly possessions are taken away, along with his children. We know that this is a test for Job; God let Satan do all of this to him because the devil insisted that Job would curse God if everything he had was taken away. But neither Job nor the friends who came to comfort him knew about this. Looking at all the terrible things that had suddenly come upon him, Job’s friends jumped to a seemingly logical conclusion—Job must have done something horrible to deserve this. Yet Job insisted that he was innocent, that he had done nothing worthy of such a punishment. The debate was on—was Job truly innocent, or had he committed an exceedingly vile act against God?

Throughout the majority of the book, both parties argue their case. Job’s friends hammer him with evidence that only the wicked suffer, urging him to confess and repent of whatever it was that had brought all this upon him. They came to comfort him, but they ended up doing nothing but accuse him. To them, the answer was clear: Job was a horrible sinner. If he ever wanted things to go back to normal, he had to repent.

That certainly sounds like a sound argument. But the interesting thing is, everyone, even Job, had it all backwards and upside-down. At the beginning of the story, God tells Satan that “there is none like [Job] on the earth, a blameless and upright man, who fears God and turns away from evil” (Job 1:8b). It was because of his righteousness that God allowed the devil to do all these things to him. Job wasn’t being punished for sin; rather, he was being given an opportunity to get to know God on a whole new level—the God Who both gives and takes away and is still worthy of worship. God was taking the terrible things that were happening to Job and using them to reveal a new part of His character.

Now, let me be clear. Sometimes, bad things do happen as a result of sin. God takes sin seriously, and if we refuse to repent, we’re eventually going to get in trouble for it. But when something bad happens, we don’t have to automatically assume that it’s a result of sin. Maybe it’s God telling us that it’s time to get to know Him better. Maybe we’re about to learn something incredible about Him. Maybe God’s preparing a blessing out of the burden.

One thought on “Transgression… or Trial?”