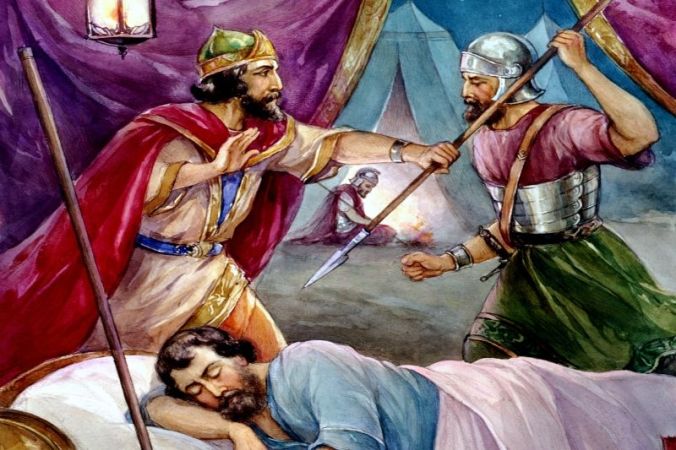 The Israelite monarchy was interesting from its very beginning. After the people demanded a king, Samuel anointed Saul. He was a fairly good king for a while, leading the people in victorious battles and keeping order in the land. But after a few years had passed, his arrogance caused him to rebel against God’s ways, and the throne was taken from him and given to another. While Saul was still king, Samuel anointed his successor, a simple shepherd named David. In an ironic series of events, David entered Saul’s court and soon rose to prominence as the slayer of the giant Philistine Goliath. But as the people’s love for David grew, so did Saul’s hatred of him. He recognized him as a rival for the throne, and he had one solution: destroy David.

Thus began one of the greatest cat-and-mouse stories in history. Many times, Saul tried to kill David, and each time David eluded him. But no matter how often David had a chance to return the favor and kill Saul, he refused. He still saw his would-be murderer as God’s anointed king, and he was determined not to harm him in any way. And eventually, this respect for his leader paid off. Saul died in battle with the Philistines, and after a somewhat lengthy war with one of Saul’s sons, the throne finally went to David. He was to become one of the most beloved kings in all Israel, and God promised that his line would never fail.

But what exactly was the difference between these two men? Both came from humble backgrounds and rose to the greatest position in their land, equally appointed to the job by God Himself. Yet Saul’s line ended with him, whereas David’s lives on today in Jesus, the king of all the world. What made them end up in such drastically different situations?

The answer lies mainly in how they treated God. As the king, it was their duty to make sure that all their people’s needs were met, including their spiritual ones. They had the responsibility to behave uprightly, in a way that communicated a favorable impression of God to the people. But while David understood this and followed God so well that he received the title “a man after God’s own heart”, Saul quickly forgot what this meant. Early in his reign, he showed how little respect he had for his Lord by offering a sacrifice in a way that dishonored God. When war approached and he couldn’t hear from God, Saul simply turned to demonic means instead. He never prayed about his actions, and he thought nothing of attempting to kill God’s next anointed king.

David, on the other hand, strove to follow God in everything. When he killed Goliath, it was to prove to the Philistines the greatness of the God of Israel. He refused to kill Saul because he respected God’s anointed leader. When a band of Amalekites attacked the city he was living in and carried away his family and the families of his men, he first took the time to find comfort in God and seek His will before chasing the marauders. He sought divine wisdom in nearly everything that he did, and as a result he was usually in line with what God wanted. Because of this, he prospered, and he came to the throne as a well-respected king.

Both Saul and David had a choice in how they related to God. They both had the same knowledge of Him, but they differed in how they applied that knowledge. For David, it was more than a simple understanding of God’s character. He loved his Lord, and he wanted to honor Him with his life. We too have this choice. We can be like David and constantly seek God’s will, making every effort to live according to the plan He has for us. Or, we can be like Saul, outwardly obedient to God but in reality living lives that are far from honoring to Him. The choice is yours: Who do you want to be?